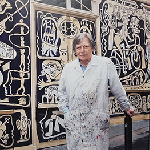 Yvon Taillandier had his first solo exhibition at the L'Art français gallery in Lyon in 1942.

After the Second World War, he returned to Paris and established deep friendships with the great artists of his time, such as Alberto Giacometti, Georges Braque, Pierre Soulages, André Derain and Joan Miró, particularly through the development of art books.

In 1947, he met Gaston Diehl, who appointed him secretary of the committee of the Salon de Mai, a position he held until 1991. At the same time, he supported the Robert Debré Association, particularly the cultural projects linked to the university hospital of the same name.

He contributed to many front pages of the newspaper L'Humanité with a recognizable style: "I opted for simple, pure and cheerful colors, because my paintings, as heavy as they sometimes seem, refuse to appear heavy and want to be joyful songs, even hymns to joy. He will also create a fresco entitled Figures libératrices, exhibited in the lobby of the newspaper for its centenary in 2004.